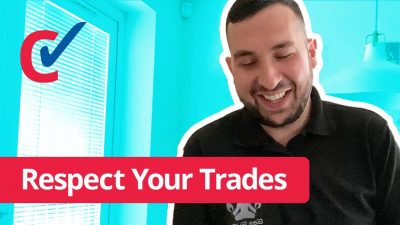 New research from Checkatrade reveals that almost two-thirds (63%) of Brits are clinging onto damaging misconceptions about the nation’s trades. Overall, 44% confess to believing that ‘cowboys’ are commonplace while more than one in ten (14%) openly admit they’ve stereotyped tradespeople based purely on profession.

The top negative misconceptions about trades are that they’re too expensive (28%), unreliable (23%) and that they’re rip-off merchants (19%) while one in ten (11%) used the term ‘unskilled’ to describe them, alongside uneducated (6%). Popular tradespeople-related Google searches also support these findings.

However, there seems to be a stark gap between perceptions and the reality of experience. More than a quarter (29%) of Brits have called upon tradespeople over the last six months and 85% admitted that they had a positive experience – with 13% even claiming their expectations had been exceeded. Checkatrade’s own data also shows that only 2% of trades have a workmanship score of less than 9/10 – the same can be said for reliability, timekeeping and tidiness.

In response Checkatrade has launched a campaign which “ asks the nation to readdress their negative stereotypes, and reappraise the contribution of tradespeople in our communities “ . Entitled #RespectYourTrades, the campaign video shares the honest reactions of its vetted and recommended members to the research findings as well as common ‘mean tweets’ about tradespeople.