Contractors R.E Martin’s work at the Derby Silk Mill has won it the Johnstone’s Trade Painter of the Year Supreme award.

The Grade ll listed Derby Silk Mill was built in 1721 and originally opened as the world’s first modern factory, before being converted into Derby’s Industrial Museum in 1974. Following an £18 million investment in October 2016, the mill has recently undergone a four-year renovation and reopened as The Museum of Making in May this year.

With a particular focus on Science, Technology, Engineering and Mathematics, the new museum showcases over 300 years of history and innovation. This includes a seven tonne Rolls-Royce Trent 1000 engine, a Midland Model railway and the world’s smallest engine run using a single human hair. The museum turned to midlands-based decorating contractors, R.E. Martin, to complete the interior and exterior redecoration of the new building.

Emmet Martin, Operations Director at R.E. Martin, explains the project: “It was a total privilege to be invited onto this project given the history of the silk mill and with it being such an important historical landmark for Derby. The new museum building is absolutely stunning, combining modern style with period features, so it was a great challenge for us to get involved with.”

History in the making

The project entailed the internal and external decoration of the four-storey building, which includes an exhibition space, storage space, workshops, public spaces and a café. Needing a high-end finish that would reflect the £18 million investment, whilst preserving the historic features of the building, R.E Martin turned to Johnstone’s Trade paints. The team used over 1075 litres of paint from the coatings manufacturer to give the historic building a fresh, modern look.

A white and dark grey colour scheme was used throughout the interior walls and ceilings with the help of products such as Johnstone’s Trade Acrylic Durable Matt and JonMat Premium Contract Matt. Both paints were chosen for their ease of application and high opacity. In particular,

Emmet explains: “The age of the building definitely added to the challenge of this project. Having to carefully paint windows and trim areas without marking the original brickwork required intricate work, but the Johnstone’s Trade products helped us achieve a great end result. Not only that, the protection of their exterior coatings meant we could walk away from the job feeling confident that it will be protected for years to come.

“We also had to work towards tight deadlines as all the renovation work had to be complete by Spring 2021 in time for the museum’s opening. The Johnstone’s Trade paints we selected helped in this respect as they had high opacity, allowing for a coverage of up to 16 square metres per litre.”

Following this outstanding work, R.E Martin were named as winners in the Hospitality, Leisure and Retail category at this year’s Johnstone’s Trade Painter of the Year awards, as well as successfully competing against the six other finalists for the ultimate title of Painter of the Year Supreme Winner. As a congratulations for their achievement, PPG awarded the R.E. Martin team a brand-new branded van for their impressive renovation work.

Emmet comments of the win: “We’re over the moon to be named as Supreme Winners. All the other nominations were outstanding, so to be voted for by our peers when there was such tough competition is an honour. The project certainly came with its challenges in terms of timescales and the preservation requirements, but I am so proud of the team’s efforts and the final result.”

Rachel Copley, head of marketing at PPG adds: “The detailed and careful work from the R.E Martin team clearly demonstrates their appreciation and understanding of the building’s heritage. While the building’s historic features were highlighted, the team managed to juxtapose this perfectly against the more modern educational and exhibition spaces – a truly wonderful project that we are proud to be a part of.” 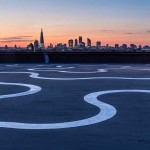 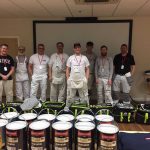 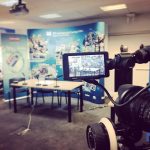 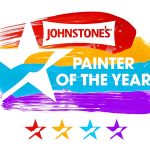 Could You Be Johnstone’s Painter Of The Year 2018?
Subscribe
Subscribe to the P&D news and P&D Show